Owning a Thermal Camera can be beneficial for any home owner, hunter, outdoorsman, security officer, rescue worker, facility engineer, and nearly every other profession. But adding an additional device to already stuffed tool bag is the last thing anyone wants to do. So consider this Seek Compact thermal smart phone camera.

There are a lot of thermal imaging units on the market. And one of the largest considerations is how convenient they are to carry around from job site to job site. And sure, there are some powerful, compact units like Flir’s C2. But this would be like carrying another smart phone, for the minimum cost of $500.

Prices pulled from the Amazon Product Advertising API on:

Product prices and availability are accurate as of the date/time indicated and are subject to change. Any price and availability information displayed on [relevant Amazon Site(s), as applicable] at the time of purchase will apply to the purchase of this product.

Or, if you’re an outdoorsman, then you’re already hiking through the woods and trails with heavy artillery and optics. So adding any devices that will only increase the weight will cause major hesitation.

And that’s the perk of using Seek’s Thermal Imaging Adaptor. It can attach easily to any iPhone or Android (just make sure you purchase the right unit). And transform the smartphone’s already excellent camera into a thermal image camera. And due to the decreased weight, any outdoorsman, rescue worker, or engineer can enjoy the benefits of Seek’s excellent thermal camera, without the burden of handling too many devices.

Review of Seek Thermal XR Imager for iPhone or Android

What is better than having a thermal camera capable of finding the freshest cinnamon buns — among other prey? The FLIR ONE accessory gave iPhones Predator-like thermal vision which turned out to be as awesome as it sounds, and now a company called Seek Thermal is promising the same with an iOS and Android-friendly smartphone accessory that makes a few compromises for a cheaper price tag.

Industrial thermal cameras or for hunting have been around for decades now, and over time they have gone from huge units strapped to the front of police helicopters to handheld devices that can be carried into dark buildings. But Seek’s Thermal is the first infrared camera that’s small enough to be attached to the bottom of your Smartphone. It relies on your device’s processor, battery, generously-sized touchscreen, and a free accompanying app. It is quite possibly the smallest thermal camera currently on the market, and that’s awesome.

Why use such imager for the smart phone?

The idea behind the Seek Thermal camera is pretty slick. Since most people already have a tiny computer with a great display in their pockets (a smart phone), all you really need is to find a way to get the thermal sensor attached to the phone and the rest can be accomplished using an app on the phone itself. The more expensive bits of the thermal camera are already a sunk cost (namely the phone), so the sensor is the only bit you really need to buy. That means the camera can be smaller, cheaper, and easier to produce.

The Seek is a tiny attachment that plugs directly into your mobile device’s charging port, and thus requires a compatible iOS or Android device, depending on the version. It measures barely two inches across, with a prominent circular lens sticking out from the left edge. The Lightning version is compatible with Apple devices running iOS 7.0 or above, and is optimized for the iPhone and iPod touch (though it worked fine with my iPad Mini). The Android version is compatible with most Android devices running 4.3 or higher, and that support USB On-The-Go (which includes nearly all recent smartphones and tablets). 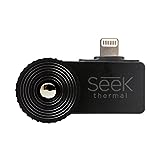 -43%
Seek Thermal CompactXR - Outdoor Thermal Imaging Camera for iOS
Price: $169.99
Was: $299.00
The Seek’s thermal sensor has a resolution of 206 by 156 pixels, significantly higher than the Flir One’s 80-by-60 thermal sensor. However, the Seek’s pictures look significantly less sharp and detailed than the Flir One’s photos because it relies only on the thermal sensor. The Flir One uses a processing algorithm to combine the 80-by-60 thermal sensor’s image with pictures taken by a VGA (640-by-480) visual camera next to it, producing distinct contrasts and boundaries where it detects temperature variations that correspond with visual edges. The Seek does not use such a feature, so its photos are lower resolution—even if there is more raw thermal data present.

However, this is not a knock against the Seek. While the pictures are not as good looking, the higher resolution thermal data makes up for it. Thermal cameras like the Seek and the Flir E4 Compact thermal imaging camera are not intended to take photos or video for entertainment purposes (though they are fun to play with). They’re intended to measure temperatures across their view and show hot and cold spots to identify problems that need to be fixed. They’re helpful tools for plumbing, electrical systems, insulation, and even carpentry, and can be extremely useful to handymen who need to find where a draft is coming from or a pipe is leaking. Because the thermal sensor itself is higher resolution and the picture isn’t processed to fit visual edges like the Flir One, the Seek Thermal actually shows more of the useful information you need to fix, repair, and improve things.

The Seek app is extremely easy to use, and slightly more powerful than the Flir One’s app thanks to a broader array of options. You can disable the Seek watermark, and add your own time and location stamps to your pictures. You can set the app to capture raw images when you take photos or videos, or display the temperature at the center of the screen, or display the highest and lowest temperatures the camera detects in-frame. You can also set a threshold to make the picture appear only if it is above a certain temperature.

The Seek Thermal is a simple, inexpensive plug-in thermal-imaging camera useful for plumbers, electricians, and anyone who wants to be handy around the house, with versions for both iOS and Android devices.